Ever thought of a smartphone with modular structure so that you can add/remove components of your phone as you want to make it suit your needs better ? Well, some people have been thinking about that for a while, like the “Phonebloks project. And now major handset manufacturer Motorola has launched a project to create their own modular smartphone.

The concept is simple actually – its like how desktop computers were built until now ; They consist of major components which can be changed as necessary – to upgrade, for more power, or any specific purpose. This made personal computers, which started as IBM’s ‘personal computer’ format, into de facto standard of computer infrastructure because of the adaptability.

But we didnt have that kind of thing in cellphones : cellphones came as monolithic, prebuilt units which could not be modified at all. This made it so that your handset would get outdated even if a component of it became outdated, even if the other parts were still up to date. Like, you could not just plug in a 3g module to your non 3g handset and make it 3g capable. Or, you could not just plug in a stronger processor when one became available. You had to buy entire unit all over again. Which is a horrible idea in regard to waste – not only it wastes your money, but also it creates high-tech, poisonous waste due to discarded cellphones.

Open hardware idea and movements were developing since a while, and it was eventually going to come to prominence. It happened today with Motorola jumping in to the foray. Their project, Project Ara, has been in the works for a year. It is based on a skeleton cellphone base, called ‘endo’, which takes on all the modules you add to the phone. You plug modules as you want, customizing or upgrading your phone by inserting modules onto this base. 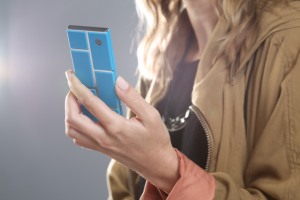 Not to mention that it looks good.